The cities are developing solutions to global problems. Therefore, cities should be provided the necessary resources and skills in order to actively engage in sustainable development. Regarding Mannheim, the Agenda 2030 will be implemented in the framework of a Model Development Process Mannheim 2030, including citizens and with financial support from the German Federal Government. This process as well as Mannheim's expertise in municipal development cooperation will be presented by a small delegation headed by Mayor Dr. Peter Kurz at the World Urban Forum 9 in Kuala Lumpur from 7 to 13 February 2018.

The World Urban Forum 9 will be the first major urban development conference since the adoption of the New Urban Agenda under Habitat III and the first conference dedicated to its implementation. Around 20,000 participants are expected within the five days.

"The majority of the population now lives in cities, and above all, cities are most affected by global phenomena such as migration and climate change. In the cities, however, solutions are also developed and implemented. This conference gives us the opportunity to show what a city like Mannheim can do to implement the New Urban Agenda. We can provide technical input, exchange views and knowledge with other cities, and not least, the World Urban Forum gives us the opportunity to make important contacts for Mannheim," explains Mayor Dr. Kurz the reasons for participating.

The City of Mannheim is part of the German delegation at the World Urban Forum and will participate in events organised by the Federal Ministry for Economic Cooperation and Development (BMZ), the Federal Ministry for the Environment, Nature Conservation, Building and Nuclear Safety (BMUB) and the German Association for International Cooperation (GIZ).

All in all, the municipal delegation will be presenting at 15 events of the conference. Three of them are own events of the city of Mannheim, amongst one will approach the Model Development Process Mannheim 2030 and the results of the Urban Thinkers Campus 2017.

Municipal Development Policy and City to City Cooperations are the focus of a series of specialist discussions at the WUF. Mannheim will be actively involved here, as the city has a wide range of experience in this field.

This includes, for example, the development partnership with the Turkish city of Kilis, which supports the vocational training of Syrian refugees. A further project with the Palestinian city of Hebron aims to improve the water supply and sewage disposal. This project is based on two pillars: First, Palestinian engineers were trained by employees of the city’s own municipal drainage service and afterwards, a district of the city of Hebron with 2,500 inhabitants was firstly connected to the sewerage network of the city and thus received access to wastewater treatment.

"The successful implementation of global goals can only succeed in dialogue with the cities. With our active participation in the World Urban Forum 9, we can enrich the discussion on the implementation and monitoring of the New Urban Agenda with local knowledge," said Mayor Dr. Kurz. 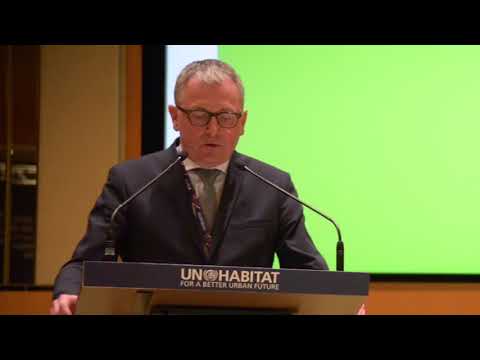